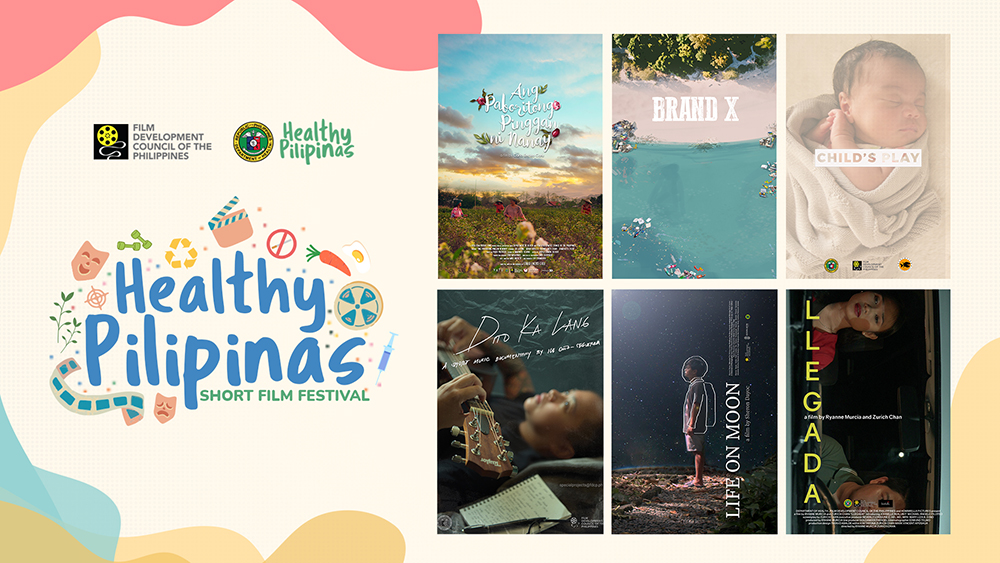 The Film Development Council of the Philippines and the Department of Health (DOH) have partnered to launch the Healthy Pilipinas Short Film Festival (HPSFF).

It will happen June 24, at the Shangri-La Plaza Red Carpet, Ortigas.

Online screenings will also follow and will run from June 25 to 26.

Healthy Pilipinas is a communication campaign spearheaded by the DOH which aims to encourage positive health habits among Filipinos especially toward the prevention and mitigation of the spread of diseases.

The national health department engaged with the FDCP beginning in 2021 to launch the HPSFF in recognition of the effectiveness and impact of short films in reaching a wider audience.

FDCP Chairperson and CEO Liza Diño: “Who would have thought that FDCP and DOH would champion together both of their advocacies in a way that is very relatable and very engaging to our audience. It’s amazing how being in lockdown has spurted creativity even in isolation. The film community stayed active with writing, story development, and preparing for the time that shoots and filming will be allowed again. We excitedly took this on as health has become a paramount concern for every person globally. It is the right time to harness the power of cinema and social media to communicate something relevant.”

Dr. Beverly Ho, DOH Concurrent Director of Health Promotion Bureau: “We’re happy that this partnership was born because FDCP does the things we are unable to do, they help us raise awareness on the 7 Healthy Habits and of course, with the added benefit of featuring our homegrown talents in the film industry. We are very much excited about this initiative.”

Six filmmakers from around the country and the regions were tapped to produce a film of not more than 17 minutes each presenting a different health issue. The six trusted filmmakers hail from Pampanga, Cebu, Cagayan de Oro, Zamboanga,  and Metro Manila. This joint endeavor will promote not only healthy living for Filipinos but will also celebrate local filmmaking talents.

The filmmakers shared anecdotes of their experiences in creating their short films.

Keith Deligero claims, “Ang intensyon ng FDCP ay ilabas ang boses ng filmmakers, it did not feel like work.” His film, “Brand X,” is an animation that talked about the theme, “Be Clean, Live Sustainably.”

“As a regional filmmaker, opportunities are not that many. FDCP has been making a lot of efforts to give us a spotlight, to share the spotlight with us,” Carlo Catu, director of “Ang Paboritong Pinggan ni Nanay” added.

Sheron Dayoc, director of “Life on Moon,” described the thought process in coming up with his film. “The real challenge was how do we come up with a short film that wouldn’t sound preachy, how do we show it in a more simplified way in presenting a new perspective.”

The project, which has been two years in the making, connects the need for a more effective medium to communicate awareness on health issues and the goal of showcasing the homegrown talents of local filmmakers.

The partnership aims to focus on the following 7 Healthy Habits:

“We really need most people to actually bring out the message of Healthy Pilipinas through the 7 Healthy Habits. For this particular engagement and partnership with FDCP, and our homegrown talents, we’ll be showcasing different subject matters of different health concerns that are concerning for the Filipino people not only this time of the pandemic but it will transcend once we are out of the woods.” Dr. Dominic Maddumba, Chief of Behavior Change and Social Mobilization Division, Health Promotion Bureau reiterated.