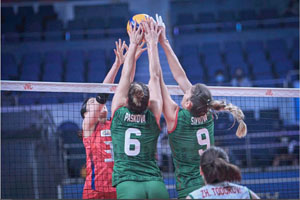 Action during the Japan-Bulgaria showdown. (VNL)

The Japanese hung tough in the crunch anchored on skipper Sarina Koga and Arisa Inoue to extend their winning run to six games that cemented their hold of the top spot of the standings.

Koga drilled in 17 kills and had one ace to finish with 18 points, while Inoue chipped in 16 points on 13 attacks and three blocks as the Japanese protected their lead for good after the Bulgarians rallied from an 18-13 deficit to pull within 23-21.

Erina Ogawa’s center kill sent it to match point, 24-21, but the Bulgarians saved two match points before an unforced errors sealed the win for the Japanese.

Mami Uchiseto also stepped up for Japan by unloading all her nine points at the attack lane, while Haruyo Shimamura and Ogawa teamed up for eight points.

The Bulgarians absorbed their fifth loss in six outings for two points despite their persistent rallies spearheaded by Silvana Chausheva and Maria Yordanova.

Chausheva and Yordanova poured all their combined 23 points on attacks, but it was not enough to douse the fire of the Japanese crew.