by Tempo Desk
in Sports, Volleyball
1 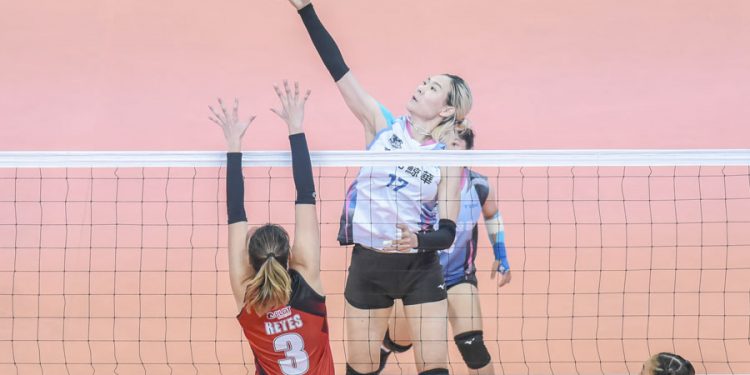 Kingwhale-Taipei pounced on PLDT’s blunders and pulled off a shock 23-25, 25-20, 25-23, 21-25, 15-13 victory to fuel its title drive in the Premier Volleyball League Invitational Conference Tuesday at the SM Mall of Asia Arena in Pasay.

The Taiwanese blew a 2-1 set lead but battled back from four points down late in the decider, closing out with a stinging 7-1 run aided by three PLDT miscues, including a Mika Reyes’ serve that failed to clear the net.

Jules Samonte scored on a superb PLDT combo play that made it 12-8 but failed on her back row attack after a long frenetic rally for a key point that the visiting squad used as a springboard to launch its stirring comeback following a straight-set romp over Army in their PVL debut Monday.

Back-to-back through-the-block hits by Chen Li-Jun put PLDT on pins and needles and the High Speed Hitters crack in the face of the Taiwanese mighty fightback with Tsai Qin-Yao’s off-speed hit leveling the count at 12.

A Chin Basas attack error shoved Kingwhale on top and Chen Li-Jung put the team at match point on a block touch before Jovie Prado ended the long PLDT spell with a blast on her second attack, sending Reyes to the service line.
But the former La Salle stalwart failed to deliver, enabling Kingwhale to clinch the draining two-hour, 25-minute lone match in the five-team semifinals of the mid-season conference of the league organized by Sports Vision.

With a 2-0 slate, Kingwhale seized solo second even as Creamline, unbeaten in three matches, took the first final berth without suiting up.

The Cool Smashers go for a sweep against Kingwhale on Friday back at the Filoil EcoOil Centre in San Juan as the league takes a two-day break Wednesday and Thursday. The lone visiting squad closes out the semis phase against Cignal on Saturday.

It was another sorry defeat for PLDT, which also lost a five-setter to Creamline last Saturday.

No ‘Mayhem’ yet in PBA as Ayo denies Converge coaching role