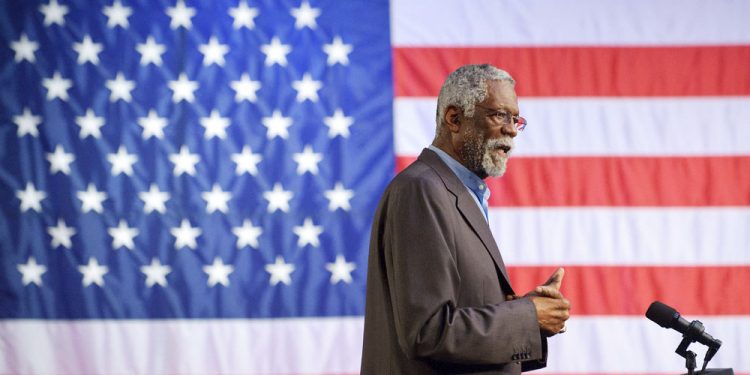 (FILES) In this file photo taken on May 18, 2011, former Boston Celtics basketball player Bill Russell speaks during a DNC fundraiser attended by US President Barack Obama at the Boston Center for the Arts. (AFP)

NEW YORK (AFP) – The NBA will honor Celtics great and civil rights activist Bill Russell by retiring his No. 6 jersey throughout the league, making him the first player to receive the honor.

A patch commemorating the 11-time champion will be worn on the right shoulder of player jerseys and shamrock-shaped logo with the No. 6 on courts will be used across the league as well for the 2022-23 season, the NBA and the National Basketball Players Association said Thursday.

“Bill Russell’s unparalleled success on the court and pioneering civil rights activism deserve to be honored in a unique and historic way,” NBA commissioner Adam Silver said in a statement.

“Permanently retiring his No. 6 across every NBA team ensures that Bill’s transcendent career will always be recognized.”

Russell, the cornerstone of a Boston Celtics dynasty that won 11 NBA titles and a powerful voice for social justice during and after his career, died on July 31 at the age of 88.

US President Joe Biden and former President Barack Obama ˗ who awarded Russell the Presidential Medal of Freedom in 2011 ˗ were among those who paid tribute to Russell’s contributions on and off the court.

“Bill’s actions on and off the court throughout the course of his life helped to shape generations of players for the better and for that, we are forever grateful,” Tremaglio said.

It will not be issued again by any NBA team to any player, although players who currently wear No. 6 — a group that includes Los Angeles Lakers star LeBron James and the Washington Wizards’ Kristaps Porzingis — can retain it.

The NBA said the Celtics plan a “separate and unique recognition” for Russell on their uniforms, which will be revealed at a later date.

While the league-wide jersey retirement is a first for the NBA, it has happened in other North American leagues.

Major League Baseball permanently retired No. 42 in 1997 in honor of Jackie Robinson, who broke the big leagues’ color barrier.

The NHL said upon Wayne Gretzky’s retirement in 1999 that his No. 99 would be retired league-wide.

The wait is over

Cubs feel the magic in ‘Field of Dreams’ win over Reds

Cubs feel the magic in 'Field of Dreams' win over Reds