by Tempo Desk
in Sports, Volleyball
2 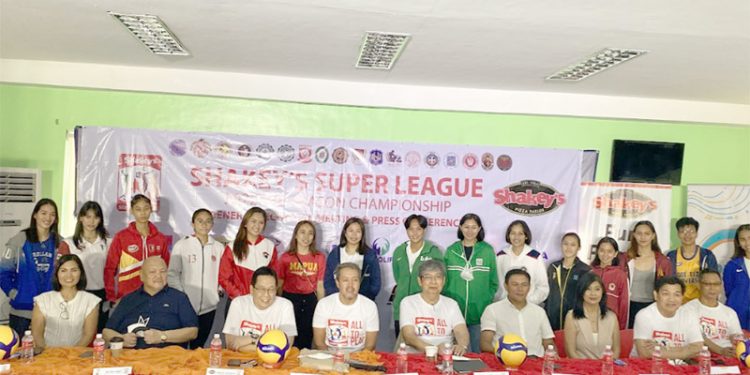 Players, team officials and organizers pose during the launching of the Shakey's Super League. (SSL)

The Shakey’s Super League (SSL) just got more exciting with 18 teams from the National Collegiate Athletic Association (NCAA) and the University Athletic Association of the Philippines (UAAP) set to compete in the rebranded league beginning on Saturday, Sept. 24 at the Rizal Memorial Sports Complex in Manila.

For the first time in the history of Philippine volleyball, all 18 participating teams are from the premier collegiate leagues, including reigning UAAP titlist National University and NCAA champion College of St. Benilde.

Vicente Gregorio, president and CEO of Shakey’s Pizza Asia Ventures, Inc (SPAVI), was excited about the joint venture with Athletic Events and Sports Management, Inc (ACES) and being part of the now more popular sport in the country.

“I remember very well when Shakey’s was first approached to help volleyball (in 2004). Volleyball was not a popular sport as it is today. I thought it was an opportunity for our company and for our brand. In Shakey’s, na-miss namin ‘yong involvement in volleyball. We always felt this is a sport synonymous already to the Shakey’s brand and vice versa,” said Gregorio during the pre-season championship press conference.

After successfully gathering all collegiate teams for the rebranded tournament, the organizing body of the SSL also announced another campaign under its management –– the National Invitational Championship which will be held next year in February.

The 12 competing teams for the nationwide event will be coming from the top three schools in the NCAA and UAAP, which will be completed by six other teams, two of each from Luzon, Visayas, and Mindanao.

Chairman and CEO of ACES Philip Juico was also delighted with the positive feedback from the fans about the return of the famed volleyball league which will be followed by the national invitationals championship in 2023.

“We are giving notice to the teams and the host that there’s a lot more at stake than just the championship of your respective leagues,” said Juico.