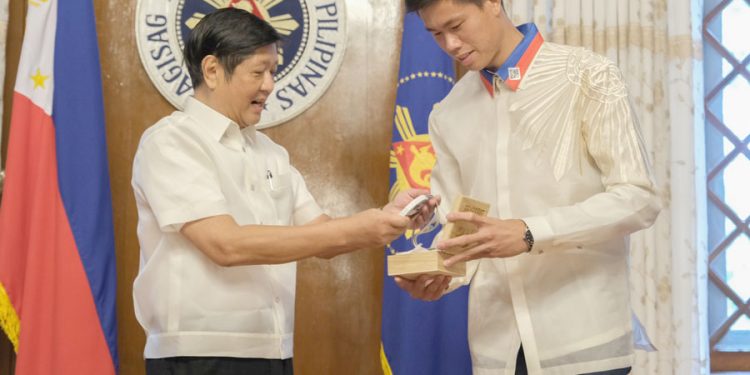 Pole vault ace EJ Obiena has been visiting places and people closest to his heart during a month-long break from training and competition in Europe.

Before flying back to Italy to begin his preparation for the 2024 Paris Olympic, the world No. 3 Obiena paid a courtesy call on President Ferdinand “Bongbong” Marcos Jr. at the Malacañang on Friday, knowing full well that Marcos will be his great ally in his bid to accomplish his ultimate dream – winning an Olympic medal.

“President @bongbongmarcos is a true sportsman and supporter of sport. Warmly welcomed the @psc_gov and EJ Obiena. He gave very simple, clear instructions- lets help our athletes because what they do is important to our nation. Thank you Mr. President,” Eala wrote on his official Twitter page.

After a fruitful stint at the World Athletics Championships in the USA where he became the first Filipino to capture a bronze medal in the prestigious event, Obiena is going to plunge a into serious training – a training that is next to none.

Obiena intends to break the 6.0-meter height that could be used as a barometer to his success in the Paris Games.

Obiena, who upstaged world No. 1 and record holder Armand Duplantis of Sweden in one big event after clearing the 5.91 meters, was recognized by the House of Representatives on Oct. 11 for bringing pride and glory to the country.

The 27-year-old was handed a copy of House Resolution No. 10 presented by House Speaker Martin Romualdez during a simple handover ceremony.