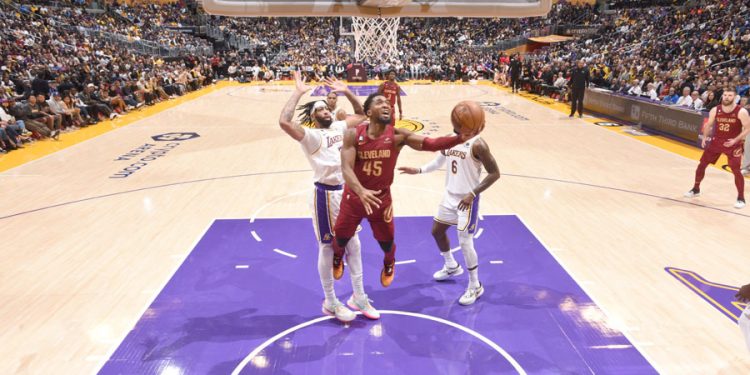 Donovan Mitchell of the Cleveland Cavaliers drives to the basket during the game against the Los Angeles Lakers on November 6, 2022 at Crypto.Com Arena in Los Angeles, California. (AFP)

Darius Garland added 24 points and the Cavs pulled away in the second half against a lackluster Lakers side that got only two points from star Anthony Davis after the interval.

Jarrett Allen added 16 points for the Cavaliers, who won their eighth straight and at 8-1 are second to the 9-0 Milwaukee Bucks in the Eastern Conference.

The winning streak is Cleveland’s longest since a 13-game streak in 2017 ˗James’s final season with the club.

Meanwhile, the sputtering Lakers fell to 2-7. They led by as many as 12 in the first half and were up by six at the break, but couldn’t muster a response as they were outscored 56-36 in the second half.

“All of our spirit seemed to have left the building, and that’s one of the parts of re-establishing a winning culture is being able to maintain a competitive spirit,” Lakers coach Darvin Ham said.

James scored 27 points and Davis had 19 with 12 rebounds. Russell Westbrook scored 19 points and handed out 10 assists to go with seven turnovers.

But with their offense sputtering late, the Lakers couldn’t find a way to shut down Mitchell and Garland, who had missed six of Cleveland’s previous seven games with eye and knee injuries.

Mitchell, a three-time All-Star guard who joined the Cavaliers from the Utah Jazz in September, has scored 30 or more points in six of eight games with his new team.

He said Cleveland, trying to return to the playoffs for the first time since the 2017-18 campaign, wasn’t focused on their former star James.

“I grew up a Cavs fan so I’m very aware of LeBron, but I don’t think that was what we brought into the game,” Mitchell said.

Elsewhere, Fred VanVleet returned from a three-game injury absence to score 30 points and hand out 11 assists to help the Raptors beat the Chicago Bulls, 113-104 in Toronto.

O.G. Anunoby scored 22 points and Scottie Barnes put up 19 points with 10 rebounds as the Raptors bounced back from a heartbreaking 111-110 loss to Dallas on Friday.

The Bulls coughed up 17 turnovers leading to 23 points for Toronto. But they were down by just one point after Patrick Williams’s dunk with 4:23 remaining.

The Raptors responded with a three-point play by VanVleet and Anunoby came up with a steal and a driving dunk as Toronto pulled away again.

In Memphis, Desmond Bane and Ja Morant combined for 51 points as the Grizzlies beat the short-handed Washington Wizards 103-97.

Despite the absence of Washington’s leading scorer Bradley Beal, the Wizards seized a quick 9-0 lead before the Grizzlies found their range.

Bane scored 28 points and Morant added 23 with nine rebounds and six assists for Memphis, who led 57-43 at halftime, pushed the advantage to as many as 23 in the third quarter and turned back the Wizards’ comeback bid in the fourth.

GMA drops ‘Love Is Us This Christmas’