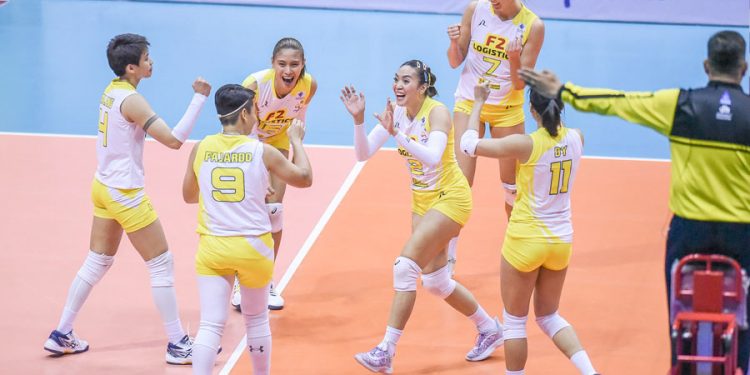 Creamline is beatable after all.

F2 Logistics proved this as it rallied from a 2-set down to complete a stirring  22-25, 23-25, 25-20, 25-19, 15-11 win over the erstwhile unbeaten and boost its semis bid in the Premier Volleyball League Reinforced Conference at the Smart Araneta Coliseum.

Import Lindsay Stalzer erupted for 27 points highlighted by 22 kills and three aces for the Cargo Movers, who hiked their win-loss tally to 3-2 at fourth place.

The Cargo Movers also drew strength from Kim Dy, who unloaded 18 points including six blocks, as well as Kalei Mau and Aby Maraño, who chipped in 11 points apiece.

Yeliz Basa, Alyssa Valdez and Jema Galanza conspired for 43 points for Creamline, but still failed to douse the fire of the Cargo Movers.

The Flying Titans saved one match point after the Lady Troopers moved to snatching the set off a block touch from a successful challenge then banked on import Odina Aliyeva’s stinging backrow attack and Des Cheng’s hit to steal the frame to the chagrin of the Army side and its fans.