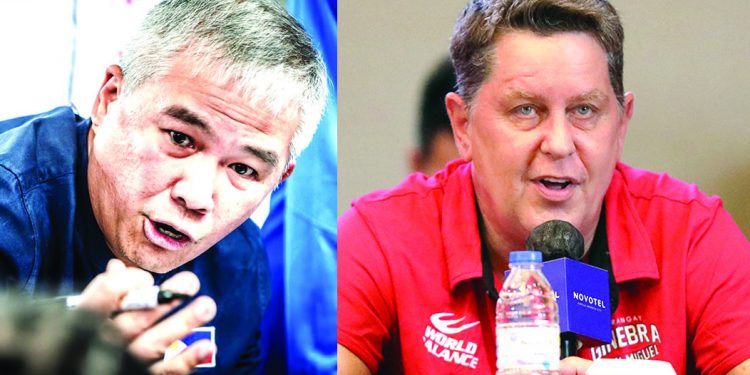 A total of 42 championships with tons of coaching experience in international basketball.

This sums up the braintrust of Gilas Pilipinas with head coach Chot Reyes, a nine-time PBA champion, backstopped by Tim Cone and Jong Uichico.

Cone, the winningest coach in PBA history with 24 titles to his name and the only mentor to win a Grand Slam with two different ballclubs, has reunited with Reyes after working together nearly a decade ago.

An upcoming coach in the pros back then, Cone hired as one of his early assistants a young tactician named Chot Reyes, his former rival in inter-Village basketball tournaments in Dasmarinas, Makati.

Together, Cone and Reyes steered Alaska to its first PBA championship in 1991.

In 1993, Reyes earned his first head coaching job at Purefoods and had, since then, forged some kind of friendly rivalry with Cone, culminating in half a dozen title clashes with their head-to-head at 3-3.

Amid the competition, however, was born a strong bond between the two coaches, on and off the court.

When Cone was named head coach of the Centennial Team in 1998, he brought in Reyes to become his assistant coach. Reyes, in turn, placed a call posthaste to Cone when the national team came calling soon after.

“Chot and I worked together for many years, with Alaska and the Centennial Team together and then back when he was national coach in the mid-2000s. Our wives are best friends and they work together in their own business. The connection is really strong between Chot and I,” said Cone.

The Barangay Ginebra San Miguel coach is also thrilled to work with Uichico, who led the Kings to a couple of championships in the mid-2000s.

Six years removed from coaching in the PBA, Uichico spent the past few years working as head of the Basketball Coaches Commission of the Samahang Basketball ng Pilipinas.

He spearheads the group that educates aspiring coaches, referees and technical officials in the grassroots level. He, however, has always made himself available for flag and country once summoned.

Cone has fond memories of working with Uichico not too long ago.

“I got the opportunity to work with Jong during the Southeast Asian Games three years ago. I’ve always watched Jong from afar and he’s a Ron Jacobs protege and Ron was the absolute legend. He’s almost like a God in basketball. Getting to know Jong kinda lets me see what Ron used to do. I’m really fortunate to know both of them,” said Cone.

Before his last coaching stint at TNT, Uichico was one of the most successful coaches in the PBA.

Now Uichico has come full circle in serving the national team – as a player, an assistant and as head coach.

As part of the Gilas coaching staff for the 2023 FIBA World Cup, Uichico has immersed himself into whatever role he gets assigned to.

“Wala naman talagang designated specific roles (in Gilas coaching staff). It just comes. Coach Tim is more or less in charge of the defense. I’m in charge of the scouting. Josh (Reyes) is in charge of the offense. Then, of course, Coach Chot is more overall. Without saying, we get to our roles just going with the flow.  We just fill in the spots where we think we can help,” said Uichico.

Uichico and Cone relish the opportunity to work with Reyes.

“What I try to do is to make sure the players are fundamentally sound and take a look at what the fundamental details they’re doing. So my contribution is probably more on the defensive side. I pride myself in our own defense at Ginebra through the years.”

Cone coached the national team to a gold medal finish in the 2019 Southeast Asian Games in Manila and to be back gives him an opportunity to be part of another, albeit much bigger, international experience.

“I contribute where I can and to me, I’m just trying to get the guys a defensive mindset. I kinda think I’m in charge of their mindset defensively, not necessarily their techniques at how they do it, but just focus on defense. I’m always the one who’s talking about defense because I know Chot and Josh will totally take care of the offense,” said Cone.

Cone describes Reyes as the master of the dribble drive, but considers Uichico as probably the best scout in their group.