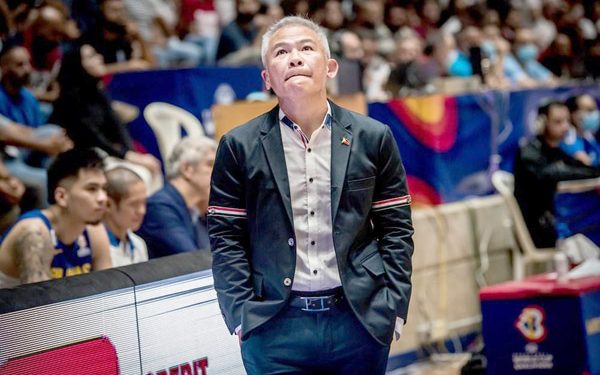 Goorjian and Reyes had a small talk at the end of Dragon’s 140-108 rout of the Tropang Giga on Wednesday, Nov. 23 with the former disclosing that he invited the latter for a meal during Bay Area’s one week break before the playoffs.

“Just an opportunity, we’re both involved with national teams and to share some ideas and some thoughts moving forward. I have respect for his basketball brain and I said we got a little break here, maybe we can get together and have a meal and break bread,” shared Goorjian.

Goorjian, who serves as the head coach of the world third-ranked Australian Boomers, admired how Reyes managed to go back-and-forth and juggle his duties as head coach of both the national team during the fourth and the fifth window while still keeping his hands on the Tropang Giga’s campaign in the PBA.

“I’ve been here for a long time, he’s been busy, he has done an amazing job. I’m with the Australian national team, I am not coaching the window games. He’s been travelling everywhere and coaching Gilas and also coming back and doing this. Full respect to him,” noted the veteran internationalist.

“What he’s seen in the region, what he sees coming I just want to get some thoughts from him and share some ideas and again break some bread with a friend,” he added

With Reyes at the helm, Gilas Pilipinas showed a steady rise in its preparations for the next year’s world cup, even completing a sweep of its assignments in its middle east trip during the fifth window of the qualifiers.

That, however, came with a huge cost as TNT’s fate in the Commissioner’s Cup now hangs in the balance following a roller-coaster campaign which even took a more serious blow after the loss to the Dragons.

While they were good friends, Goorjian was all business during the contest as he wanted his Bay Area team to secure the twice-to-beat incentive in the quarterfinals.

“Tonight was about that top two advantage and we know the playoffs are gonna be different and that’s something that we never experienced before so we were really conscious of that advantage tonight,” said Goorjian.