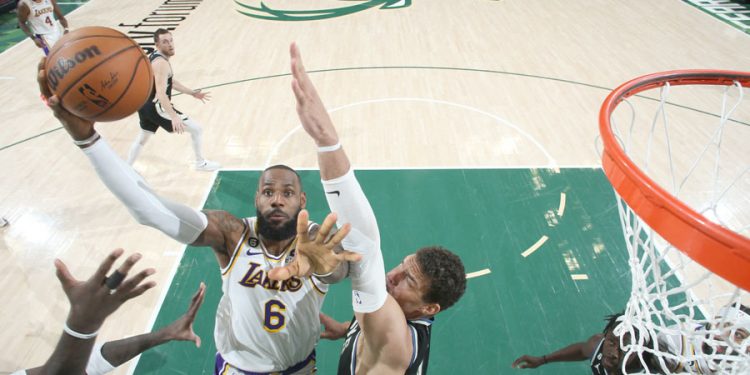 James scored 28 points and handed out 11 assists ˗ passing former Lakers great Magic Johnson for sixth on the NBA’s all-time assists list ˗ as Los Angeles weathered a late Bucks surge to emerge with the victory in coach Darvin Ham’s return to the city where he won a title in 2021 as an assistant to coach Mike Budenholzer.

It was also close in Boston, where Miami star Jimmy Butler returned from a seven-game injury absence and helped the Heat grab a 120-116 overtime victory that snapped the Eastern Conference-leading Celtics’ 10-game home winning streak.

In Milwaukee, the Lakers delivered arguably their best victory of the season.

Giannis Antetokounmpo scored 40 points and Jrue Holiday added 28 points for the Bucks, who had All-Star forward Khris Middleton for the first time this season after his recovery from off-season wrist surgery.

The Lakers led by 14 in the first half and by 10 in the third, but the fourth quarter was a back-and-forth battle featuring half a dozen lead changes.

A Davis dunk after a James steal put the Lakers up 132-127 with just over a minute remaining.

Brook Lopez pulled the Bucks within three but Grayson Allen and Holiday both missed three-pointers in the waning seconds.

He also shook off an injury scare, grabbing his left ankle in pain after tangling with Middleton and limping to the bench but soon returning to the game.

There was drama in Boston, where Celtics star Jalen Brown scored 37 points and banked in a stunning three-pointer to force overtime against Miami.

Two days after dropping a 134-121 decision to the Celtics, the Heat rallied from 13-point third-quarter deficit, mounting a 26-8 scoring run that put them up by five with 7:16 to play.

Butler’s jump shot put Miami up 108-105 in the final minute of regulation. Jayson Tatum then answered with a dunk before Butler struck again — only for Brown to put the Celtics level at the buzzer.

It was tied with 1:02 left in overtime, but Bam Adebayo made two free throws for Miami and, after Tatum missed a three-point attempt, Butler drained a step-back jump shot that proved the game-winner.

Heat coach Erik Spoelstra said before the game that with Butler’s return from a sore knee “it feels like we’re whole.”

The Brooklyn Nets notched a fourth straight victory in dominant style, leading by as many as 36 points on the way to a 114-105 wire-to-wire home win over the Toronto Raptors.

Denver’s two-time defending Most Valuable Player Nikola Jokic struggled to get going, scoring just four points in the first half before finishing with 24 points, 10 rebounds and eight assists.