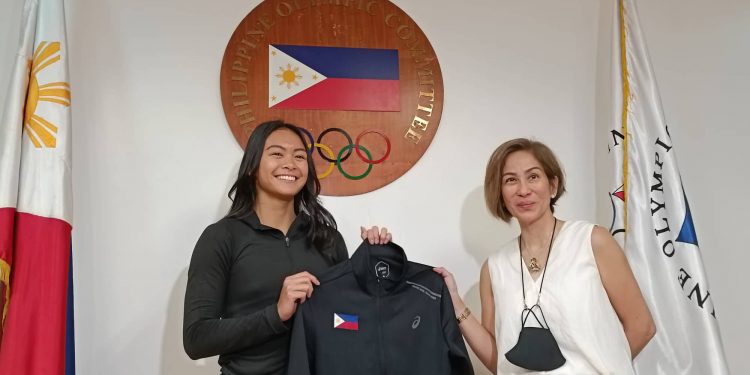 A bemedalled swimmer in the 2020 Tokyo Games will be competing for the country in the future.

Fil-Canadian Kayla Sanchez announced Thursday that she would be donning the country’s colors, hopefully starting with the world championships in July next year.

“I’m just at the point in my life that I’ve grown independent and confident on what I can do and I want to be able to bring that here in the Philippines,” said the 21-year-old Sanchez.

“I think it’s a bigger picture and a bigger meaning using what I do and what I love to help inspire the Filipinos. I’m very humbled to be part of it and I’m proud of my heritage.”

Born to Filipino parents who trace their roots in Pampanga and Baguio, Sanchez will be serving a one-year residency before she could compete in foreign races as part of the international swimming federation (FINA) rules.

She would have to serve a three-year residency if she would want to compete in the Olympics, but the Philippine Swimming Inc. (PSI) said an appeal could be made in the future.

Sanchez’s move can be considered an inspiring one.

Aside from the silver medal in the 4×100 meter freestyle and bronze in the 4x100m medley in the Tokyo Olympics, Sanchez also boasts of an impressive record that include two silver and four bronze medals in the world championships (long course).

She also won three gold and one silver medal in the world championships (short course), two bronzes at the 2018 Tokyo Pan Pacific Championships, and two silvers in the 2018 Commonwealth Games.

She was also a triple gold medalist at the 2017 world junior championships in Indianapolis, apart from one silver and one bronze medals.

While her specialty is in the relays, Sanchez said moving to the Philippines would give her a chance to try new things.

“Once I develop a stronger connection with my coaches, we can discuss and choose what we can focus on,” said Sanchez, adding that she mostly excels in the freestyle events.

Asked if she can deliver the same accolades she gave when she was representing Canada, Sanchez smiled sweetly and said: “I’m always striving to get better and I’m very hardworking. I want to achieve great things for the Philippines so let’s say a gold medal and you guys can hold me to it.”

Ikeda still wins Aoki crown by 2 despite a 77

Ikeda still wins Aoki crown by 2 despite a 77