by Tempo Desk
in Football, Sports
2 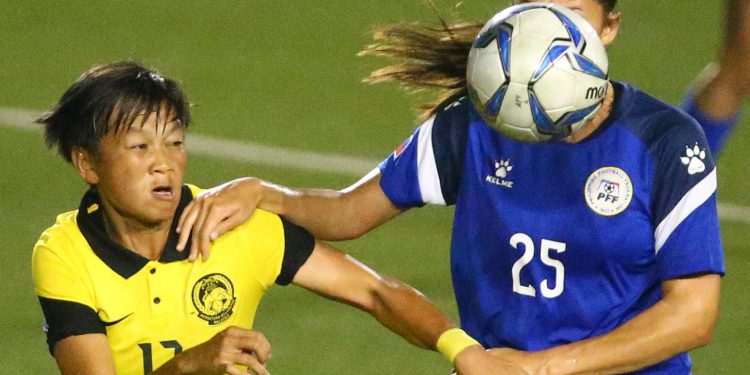 Sara Eggesvik stars anew for the Filipinas by knocking in a powerful blast from 30 yards. (Ali Vicoy)

The Philippines conjured up another dominant performance and made quick work of Malaysia, 4-0, to firm up its hold of the solo lead in the 2022 AFF Women’s Championship Friday night, July 8, at the fabled Rizal Memorial Football Stadium.
The Filipinas displayed superb passing and scored two goals in the first half behind the efforts of Sarra Eggesvik and Katrina Guillou to put the national team ahead.
With momentum on their side, Quinley Quezada and Anicka Castaneda, who came off the bench anew, connived in the next half to pull away for good with less than twenty minutes to spare.
The Philippine women’s national football team remained atop the standings with nine points in Group A as Thailand trailed at second seed while playing against Singapore over at Binan Football Stadium in Laguna at presstime..
Earlier here, Australia also routed Indonesia, 4-0, to secure its No. 3 spot.
Sara Eggesvik provided the early spark for the Filipinas with a powerful 30-yard blast at the 32nd mark.

The goal was dramatic as it was first deflected by Malaysian goalkeeper Nuzul Azurin Mazlan but the ball eventually crossed the line to the delight of a small but highly-appreciative crowd.
Two minutes before half time, Katrina Guillou found the back of the net at the 43rd minute off a rebound from the earlier attempt of Tahnai Annis.
Eva Madarang paved the way for that play but Annis’ strike was caught by Mazlan.
The Philippines stepped on the gas as soon as the second half kicked off with a Quinley Quezada header at the 48th mark off a long dish from Eggesvik.
The Filipinas, still wanting for more, once again utilized Castaneda as she scored a header off another Eggesvik assist at the 72nd minute for their fourth and last goal.
Cam Rodriguez had a clean shot in the extra three minutes to give the Philippines its fifth score but her attempt sailed high over the post.
The Filipina booters will next face Indonesia at the same time and venue on Sunday.

Chot Reyes back as Gilas coach for Asia Cup

Chot Reyes back as Gilas coach for Asia Cup