by Tempo Desk
in Football, Sports
1 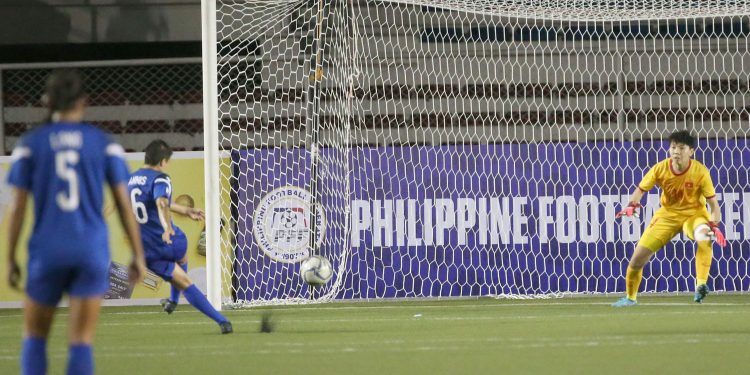 Skipper Tahnai Annis comes up with a well-placed spot kick to help the Filipinas score a masterful 4-0 win over deposed champion Vietnam on Friday at the Rizal Memorial Stadium. (Ali Vicoy)

The Philippines produced a performance for the ages and blew defending champion Vietnam to smithereens, 4-0, in the semifinals of the 2022 AFF Women’s Championship Friday night, July 15, at the Rizal Memorial Stadium.

Playing with more passion and maturity this time three days after a heartbreaking 1-0 defeat to Thailand for Group A top seeding match, the Filipinas dominated the Vietnamese and electrified more than 3,000 cheering crowd with their own version of the beautiful game.

“That was probably our most complete performance,” said Filipinas head coach Alen Stajcic.

“We’ll enjoy this win in the meantime then perhaps look forward to revenge on Sunday,” added the Australian tactician.

The shocking win enabled the Filipinas to finally barge into the final, their best outing so far in the tournament, and arranged a grudge title showdown against Group A rival Thailand on Sunday, July 17.
The Thais remained undefeated throughout the tournament after besting Myanmar, 2-0, earlier at the same venue.
Hali Long opened the floodgates for the Philippines with a header off a Tahnai Annis corner kick in the 31st.
It was all the Filipinas from that point on, behind the efforts of Annis and Sarina Bolden, as the Vietnamese struggled in the face of the Filipinas’ resilience, what with their offensive juggernaut and rock-solid defense.
With momentum on their side, it only took a couple of minutes in the next half for team captain Annis to convert the second goal for the Philippines.
Annis showed poise on the penalty kick and fired off a powerful strike past Vietnamese goalkeeper Tran Thi Kim Thanh at the 51st minute following a handball violation by defender Hoang Thi Loan inside the penalty area.
Sarina Bolden then took charge, putting her own magical show that further energized the crowd.

First in the 61st mark with a spectacular header off Annis’ corner kick.
Bolden doubled her tally 10 minutes later at the 71st minute with yet another remarkable header from Quinley Quezada’s pass inside the box, which was actually off a rebound from Carleigh Frilles’ earlier attempt.
Frilles’ strike hit the crossbar but Quezada managed to control the ball and set it up over Bolden with a soft yet high assist as confusion arose over the Vietnamese side.