by Tempo Desk
in Sports, Weightlifting
2 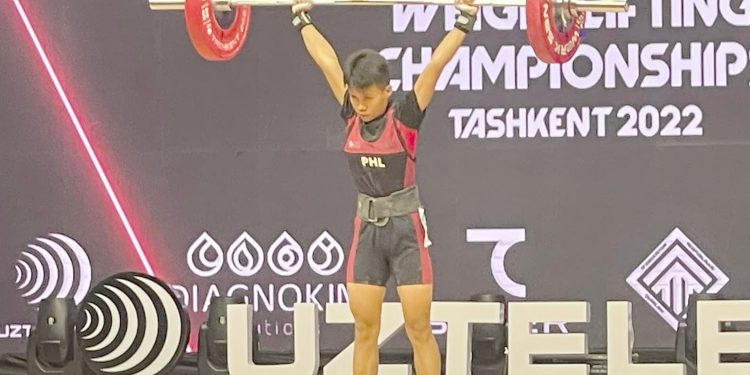 Weightlifter Angeline Colonia made heads turn on Sunday, July 17, after breaking the world and Asian records in the 40kg category and taking home two gold medals and one silver in the 2022 Asian Youth and Junior Weightlifting Championships in Tashkent, Uzbekistan.
Colonia shattered both world and Asian youth standard records, previously set at 61kgs, in her category after lifting 62kg in snatch.
Vietnamese Duong Thi Kim Yen bagged silver medal after 56kg in her first attempt and failed in her second (59kg) and third (61kg) tries while India’s Kishor Akahksha Vyavhare placed third with 55kg.
In clean and jerk though, the 15-year-old Colonia settled for a silver medal after breaching 72kgs and trailed behind Duong Thi, who had it a kilogram away from the Filipina. Vyavhare also ranked third with 70 kg.
Overall, Angeline, the sister of 2016 Rio Olympian Nestor Colonia, reigned supreme with a total lift of 134kg while Duong Thi (129 kg) and Vyachare (125kg)  followed suit in second and third place, respectively.
Meanwhile, Prince Keil de los Santos also won two bronze medals (clean and jerk and overall) in the 49kg category. He lifted 103kg in clean and jerk and had an overall lift of 186kg, along with his 83kg in snatch.