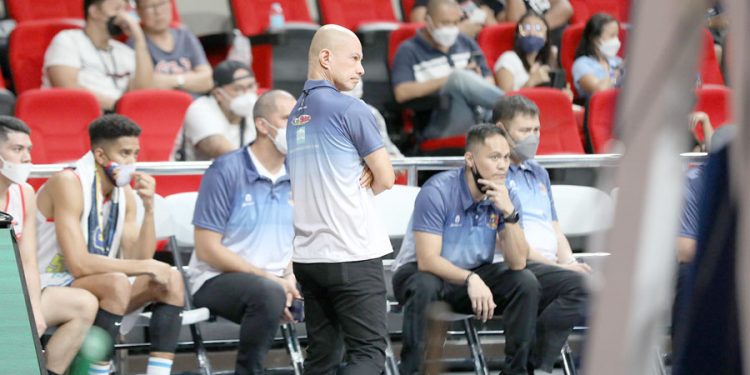 NLEX played the spoiler’s role in the homecoming of its former coach Yeng Guiao at Rain or Shine, grinding out a 96-90 victory to open the 2022 PBA Commissioner’s Cup with a win even without new head coach Frankie Lim at the PhilSports Arena on Friday Sept. 23.

Earl Clark, the import Guiao picked when he was still the head coach of the Road Warriors, bucked three early fouls to lead his team especially in the final frame where they created the much-needed separation to come away with the victory behind the guidance of interim head coach Adonis Tierra.

Clark finished with 26 points and 14 rebounds but shone brighter on the defensive end with six blocks and four steals. He formed a deadly twin tower with Justin Chua who combined for 17 points in the payoff period to pull away from a slim 75-73 lead early in the fourth.

The Road Warriors then embarked on a blistering 16-6 run allowing them to build a 14-point lead, 91-77, which they never relinquished until the final buzzer.

Chua had 18 points and eight rebounds while Kevin Alas chipped in 15 points and seven boards.

It was actually a back-and-forth affair with both teams seeming almost running the same plays understandably since it’s only been a couple of weeks since Guiao’s departure from NLEX.

Steve Taylor Jr. paced the Elasto Painters with 21 points and 12 rebounds while Rey Nambatac added 11. Rain or Shine managed to cut the lead down to single digits in the waning minutes but a couple of defensive stops from the Road Warriors slammed the door on the Elasto Painters comeback hopes.

In the first game, Aldin Ayo began his PBA coaching career in a rousing fashion as Converge tore apart Terrafirma, 124-110.

The FiberXers pulled away from the tight offensive showdown against Dyip in the third quarter, unleashing a blistering 22-6 rally that all but broke Terrafirma’s backs and spoiled a 43-point explosion from returning import Lester Prosper.

Seven players scored in double-digits for Converge led by Quincy Miller who proved to be as good as advertised, dropping 16 of his 38 points in the payoff period, which also went 16 rebounds and five assists while Maverick Ahanmisi provided support with 18 points and seven dimes.

Justin Arana and RK Ilagan chipped in 13 and 12 points, respectively, while Alec Stockton, who was one of the catalysts of that third quarter breakaway, also finished with 11 points. Jeron Teng and Aljun Melecio were the other double-digit scorers with 11 and 10.