Something scary for Christmas 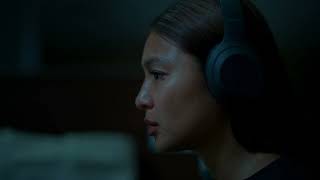 Nadine Lustre is part of this year’s Metro Manila Film Festival via the film “Deleter.”

As made obvious in the title, it’s not quite, err, Christmassy.

“The film follows Lyra, who works shifts at a shadowy online content moderation office where employees, known as deleters, are tasked with the process of filtering graphic uploads from reaching social media platforms. The responsibility of censorship proves bearable for Lyra, whom her co-workers, as well as her boss Simon, observe as a cold person unfazed by the disturbing imagery she sees on a daily basis. What they do not know is that Lyra hides a deep trauma. Lyra’s attempt to erase and forget her past has forced her to don an apathetic face to the horrors of the world.”

The film is directed by the award-winning Mikhael Red.

Asked why we should watch it, Nadine, shared, “I think this is very interesting and different.”

“I think it is the only horror film sa line-up ng MMFF this year so, for those into the genre, this is the best choice,” she added.

Her participation in the film is a continuation of her effort to show a more mature version of herself.

“Ayoko na kasi noong mga films na masyadong common ang theme,” Nadine said. “Ngayon, whenever I look into a script, I always go for those that offer something different for me to do.”

Mikhael explained “Deleter” is about “pyschological and emotional distress” and how it affects us all.

“Ito yung mga bagay na we could all relate to kasi we all felt it at one point naman diba? Naguguluhan, nahihirapan either with work or something na personal. It’s not just about the scares. It offers something deeper. Gusto naming mag-isip ang audience.”