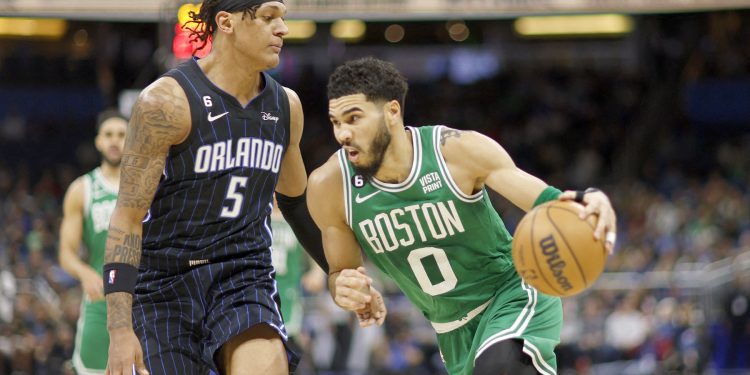 Jayson Tatum of the Boston Celtics drives against Paolo Banchero of the Orlando Magic. (AFP)

Orlando, languishing three places off the bottom of the Eastern Conference with a 17-29 record prior to Monday’s game, took full advantage of Boston’s injury crisis to complete a deserved win at the Amway Center in Florida.

The league-leading Celtics were missing key defensive figures Marcus Smart and Robert Williams due to injury and their absence proved crucial as a fired-up Orlando stormed to victory.

Arguably the most impressive contribution came in the form of a 10-minute cameo from Jonathan Isaac, making his first appearance in an NBA game since August 2020 following more than two years dominated by injuries.

Isaac finished with 10 points, three rebounds and two steals during his encouraging return to the hardwood.

Jayson Tatum and Jaylen Brown led the Boston scoring with 26 points each, while Derrick White added 11 and Sam Hauser 13 off the bench.

In the other game, Giannis Antetokounmpo and Khris Middleton returned from injury with a vengeance as the Milwaukee Bucks arrested their current slump in form with a ruthless 150-130 pounding of the Detroit Pistons.

The 6-foot-8 Hachimura has made 30 appearances for the Wizards this season, averaging 13 points, 4.3 rebounds and 1.2 assists.

Antetokounmpo had missed the last five Bucks games with a lingering knee injury, a spell that saw Milwaukee lose three games. Middleton meanwhile had not played since mid-December.

But Antetokounmpo showed no sign of ring-rust as he led a comprehensive rout, scoring 29 points with 12 rebounds and four assists.