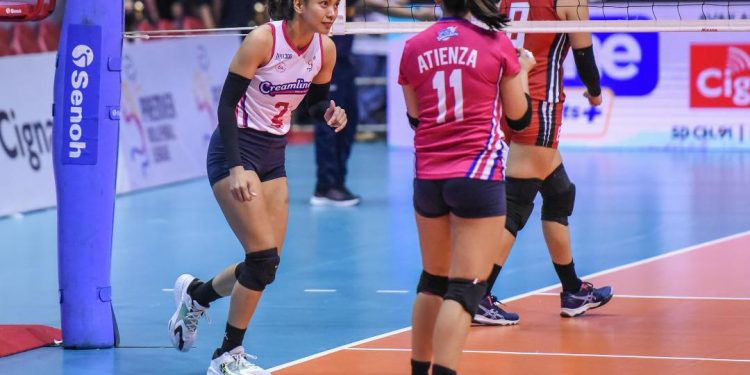 Alyssa Valdez hopes to lead Creamline to the finals once again.

Cignal and Creamline try to seal a dream title duel when they clash with separate opponents Tuesday, Nov. 29, in the Premier Volleyball League Reinforced Conference at the Philsports Arena in Pasig City.

The HD Spikers seek a breakthrough finals appearance in their 2:30 p.m. tussle with the Petro Gazz Angels, while the Cool Smashers tangle with the Chery Tiggo Crossovers at 5:30 p.m.

Nothing but the victory is expected to be in the minds of the HD Spikers to avoid going through complications in case of a three-way tie at 2-1 will occur, with import Tai Bierria slated to lead the charge.

Bierria imposed her might in their recent upset win over Creamline by unloading 21 points highlighted by 17 kills and three blocks.

The HD Spikers also banked on their defense against the Cool Smashers, where they posted 12 blocks, and is expected to be crucial when they face the Angels’ high-leaping scorers in Lindsey Vander Weide, Myla Pablo and Aiza Pontillas.

“The whole team, from coaches to players, is so proud because, I think, it’s our first time winning against Creamline. So it’s a big opportunity for us to be even better in our next game,” Delos Santos said.

In the other pairing, Creamline tries to erase that stinging loss against Cignal that put them at 1-1.

With its manpower and cohesion, expect the Cool Smashers headed by Alyssa Valdez, Jema Galanza, Jia De Guzman and import Yeliz Basa to go all out against the Crossovers led by Mylene Paat, Czarina Carandang, Dindin Manabat and Jelena Cvijovic.